AFI Catalog of Feature Films - From the American Film Institute, this catalog has comprehensive information and history for films created from 1893-1993 and less detailed information available for films released after 1993.

National Film Preservation Board - The National Film Registry, from the Library of Congress, includes both overviews and in-depth essays on most of the titles on the Registry. It also includes links to resources on topics such as copyright and film (under "Resources").

Electronic Arts Intermix - This catalog for the onsite collection of the Electronic Arts Intermix provides both biographies and lists of film and video works by artists such as Vito Acconci, Bill Viola, and Carolee Schneemann. Although it does not provide access to the works themselves, it is useful for seeing the audiovisual oeuvre for each artist (CCS login required).

Film Analysis - From Yale University, this guide provides a grounding for understanding film, from definitions of basic terms to explaining standard types of shooting.

The Interviews: An Oral History of Television! - From the Television Academy Foundation, this site features over 900 first-person interviews with people involved in the birth and growth of the American television industry, ranging from Ru Paul to Betty White to Quincy Jones. 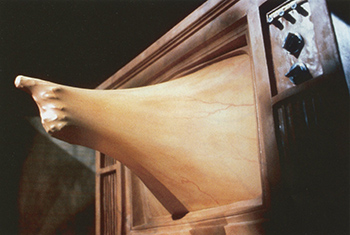 Still from Videodrome by David Cronenberg, 1983